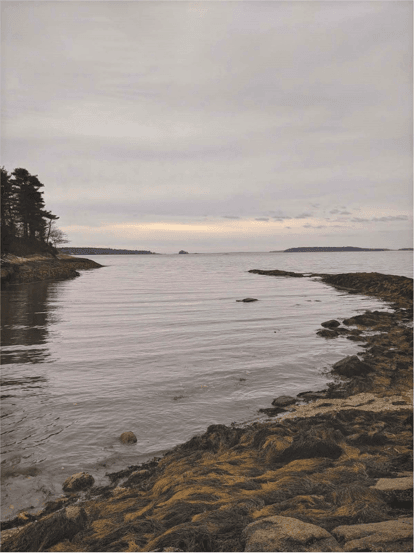 “This picture was taken on a rocky beach area just off the Casco Bay Trail at Wolfe's Neck State Park in Freeport, Maine this November. In this picture, the tide was low and still falling, so fortunately, I was able to venture out further onto the beach than would be possible most of the time. The central motif of the picture is the ocean, more specifically, the northern portion of Casco Bay which eventually becomes Maquoit Bay. The ocean is a place where I can ease my mind during times of hardship, stress, and uncertainty like what we as Americans currently face because of the many negative factors which the COVID pandemic carries. While all in the world may seem tumultuous and in turmoil, the ocean remains unchanged. Its tide cycle remains constant, marine life continues its existence the same as it always has, and the salty air and lapping waves remain. More than just being an aesthetic pleasure, for some people, including myself, the ocean serves to be a reassuring constant. No matter how dire the situations are which surround us, the ocean remains in its cycle, remains beautiful, and remains accessible.”