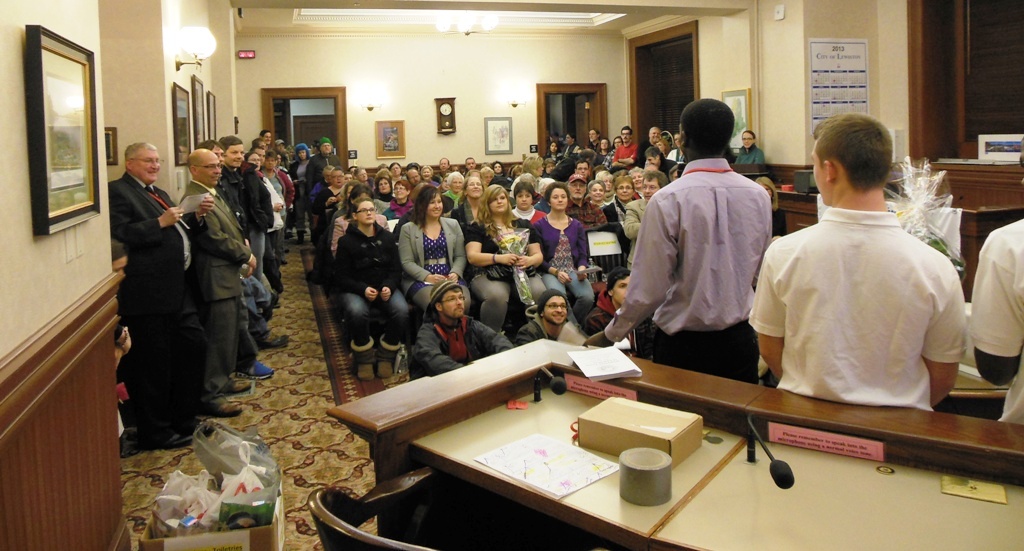 If you don't know where you're putting your slippers at night, you can't do algebra," noted Mary Seaman, Director of the Lewiston High School STEP Program, following the documentary debut of “Homeless Youth in Lewiston” on January 17th at Lewiston City Hall.

The 30-minute documentary was produced by the Lewiston Youth Advisory Council (LYAC) to build awareness about the approximately 200 homeless youth in Lewiston. Before the video was shown, LYAC members shared what an eye-opening experience making the documentary had been. According to the National Coalition for the Homeless, one out of every three homeless persons are under the age of 18, and 1.6 million to 1.7 million people under 18 will experience homelessness each year (nation wide).

The documentary featured Kat Borghoff and Kendra Sprague, both previously homeless teens, who received life-changing support from New Beginnings and Volunteers of America Northern New England. Borghoff and Sprague shared their personal journeys, to include living in a car and sleeping on a kitchen floor.

Special guests at the event were Governor Paul LePage, who shared about his own homelessness, couch surfing, and unpleasant memories from years ago and praised the youth council for addressing this concern. He was accompanied by the Department of Health and Human Services Commissioner Mary Mayhew, and Senior Health Advisor John Bott. Mayhew highlighted available resources and the effectiveness of ‘community’ working to address such issues. Lewiston City Councilors Mark Cayer, John Butler (Youth Council Liaison), and Craig Saddlemire were also in attendance.

In the film, youth council members also shared their reaction to hearing what Borghoff and Sprague have endured and stressed the film theme of ‘What Can You Do” at its close.

The youth council's documentary and presentation received a standing ovation, and audience members and LYAC shared their thoughts at the event conclusion. Attendees stressed the importance of reaching out to others, to use their voice, to start talking about homelessness, to let others know about community resources, and to share what was heard in the documentary.

Donations for New Beginnings and the LHS STEP Program were accepted at the event. In addition, LYAC Chair Kon Maiwan announced that copies of the documentary will be sold in the near future, with proceeds being split between the two entities.